I’m an Aries. And while I don’t believe in Astrology as a general rule of life, I do believe that I fit this particular stereo type. That means when I get hurt, rejected, sad, etc, I have one go-to emotion: pissed off. And I’ll be honest, when I’m pissed off I 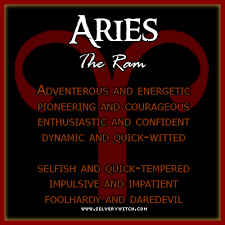 really like to be vocal about it – for better or worse. However, in my advancing and supposedly more mature years, I’ve learned that it doesn’t always pay to be vocal and have conditioned myself to act accordingly. In some situations.
For example, my boss is probably the last guy with whom I’d like to express just exactly what I’m thinking at any given time. Nor are my employees because, though I could much more easily get away with it in that audience, leaders are only leaders when they are followed, and people don’t follow those who lose their shit on a regular basis. I also try to avoid taking things out on anyone who doesn’t deserve it – strangers, significant others, pets, parents, coworkers, etc. I can’t say I’m always successful, but I try.

At the end of the day, the bottom line is if I don’t express then I repress. And then I fester and stew and marinate in whatever the issue is until it – inevitably – boils over one way or the other. Some things take longer than others. The longer it takes, the worse it gets.

So here’s the question: how drunk does a person have to be before an “expressive” text message can be sent and then thoroughly stored in unconsciousness?

Perhaps one could compose and save intelligent, scathing messages to all those with whom they’re irritated, and then when they’re stumbling and blurry-eyed they could – with their last conscious effort, like saying, “Go to hell” with a dying breath, or a self-destruct sequence on a Vodka-fueled space shuttle  – hit send just as they fall into an alcohol-induced oblivion and live without regret until at least noon the following day.

Mature? No. Effective? Possibly. Entertaining? Good or bad, most definitely.

Plus ça change, plus c'est la même chose / The more things change, the more they stay the same

The Journey of 12 Steps
Not Another Tall Blog

Not just another tall blog. Because being tall is NOT all we talk about! Follow me for tall talents, tall fashion, rock interviews and more!

Written RoShamBo for the Reader Who Craves Unpredictable Variety